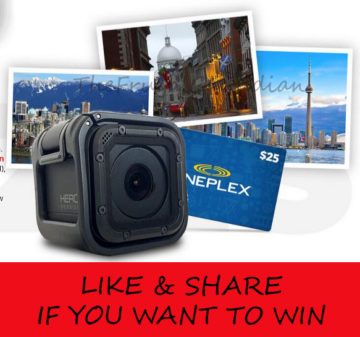 Free Cineplex Gift Cards And GoPros Cameras Being Given Away – Enter Contest
DAILY PRIZES AND DAILY PRIZE DRAWS. There are a total of five hundred and forty (540) daily prizes available to be won, and ten (10) to be awarded each Day, excluding February 27, during the Contest Period. Each daily prize consists of a $25 Cineplex gift card.
WEEKLY PRIZES AND WEEKLY PRIZE DRAWS. There are a total of eight (8) weekly prizes available to be won, each consisting of one (1) GoPro HD Waterproof Camera.
There is one (1) grand prize available to be won during the Contest Period. The selected Grand Prize winner will have the choice between one (1) of four (4) grand prize choices.
Ends on April 22, 2017.